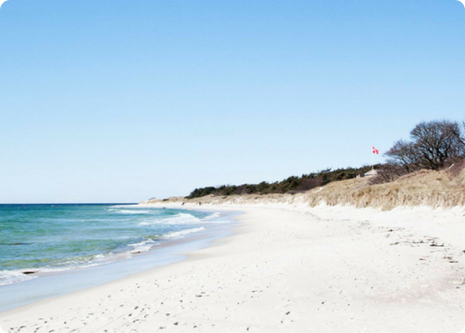 Head chef and restaurant owner Nicolai Nørregaard from the Danish Michelin restaurant Kadeau has a love for the nature. Spending time outdoor picking the herbs and vegetables for his kitchen is connected to a deeper thinking of avoiding food waste.

“When I spend time in the nature, I feel free.” – says Nicolai Nørregaard

The Danish head chef is born and raised in the Danish island Bornholm – also known as the island where the sun is always shining. Spending time here picking crops for his kitchen in the idyllic countryside, gives him a feeling of freedom.

Both Nicolai Nørregaard and his partner at Kadeau grew up on the sunshine island. Sharing the love for the place, they decided to put the Bornholm nature into their dishes in the restaurant all year round.

That means a bit of stress in spring season, a lot of preparing for the winter time and optimal use of the products with as little waste as possible.

Spring is here – and for Nicolai Nørregaard and his team at Kadeau it means the busiest time of the year. In spring season everything is blooming and growing and because of that they are going to plan dishes that  follows the season.

-It’s kind of stressing but still fantastic – all crops have been dead and gone, now everything is growing again. The new start with everything sprouting again is beautiful.

At Kadeau they grow their own crops and in growing season  they harvest the herbs, fruit, vegetables and berries for other seasons.

-It’s a good way to avoid food waste! It’s very rare that something from our gardens will be wasted. When we have left over vegetables and herbs in the garden, we preserve them for a later season, he says.

Food waste and the ethics

For Nicolai Nørregaard avoiding food waste is a natural part of being a chef. It’s both a rational way to do business, but it’s also for ethical reasons.

-Food waste is generally an important part of the everyday life as a chef. Basically it’s a part of the business: The less we throw out – the more money we earn But it’s definitely also about the ethical perspective, it’s common sense, says the Michelin chef.